USPS admits it IS spying on Americans: Law enforcement arm is snooping on social media posts and ‘working with other agencies’ in covert operation – but won’t reveal details 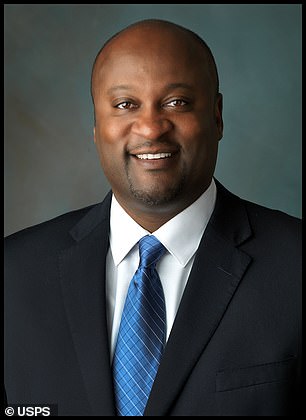 The U.S. Postal Service admitted during a Wednesday meeting to spying on citizens with its law enforcement arm, claiming it worked with other agencies to track Americans’ social media posts.

Chief Postal Inspector Gary Barksdale briefed lawmakers on the Oversight Committee regarding the program known as iCOP, or Internet Covert Operations Program, but could not provide a date for when it was initiated.

‘The Chief Postal Inspector was wildly unprepared for this briefing,’ GOPRepresentative Nancy Mace of South Carolina told DailyMail.com following the meeting with Barksdale.

The inspector was called for a briefing after iCOP was first made public in a report last week.

Mace said Barksdale revealed the program has not led to any arrests thought it’s still unclear how long it has been operating.

The bulletin focuses on a March 20 protest, the World Wide Rally for Freedom and Democracy which demonstrated against COVID lockdowns. 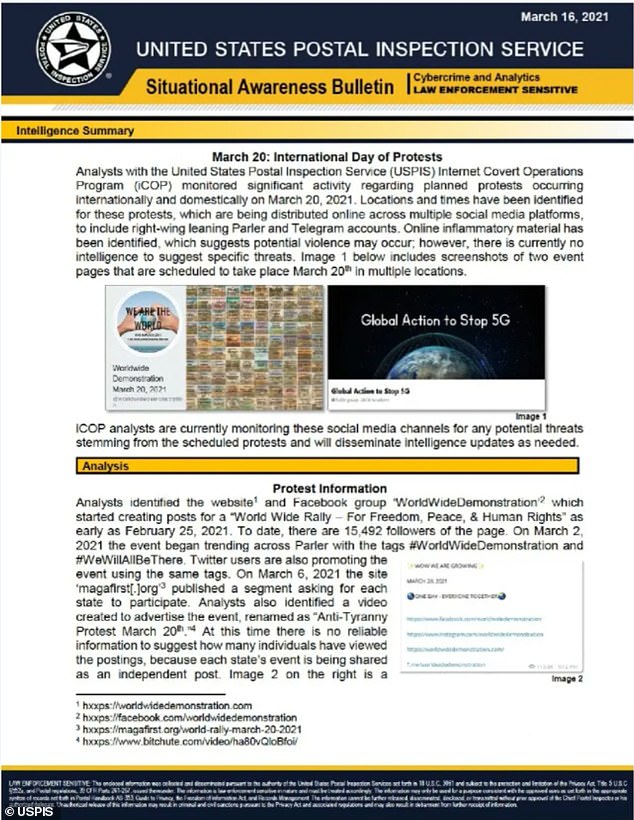 In a government bulletin, distributed through the DHS’s fusion centers, it details that the Internet Covert Operations Program (iCOP) analyzes social media sites for ‘inflammatory’ posts, including messages about planned protests 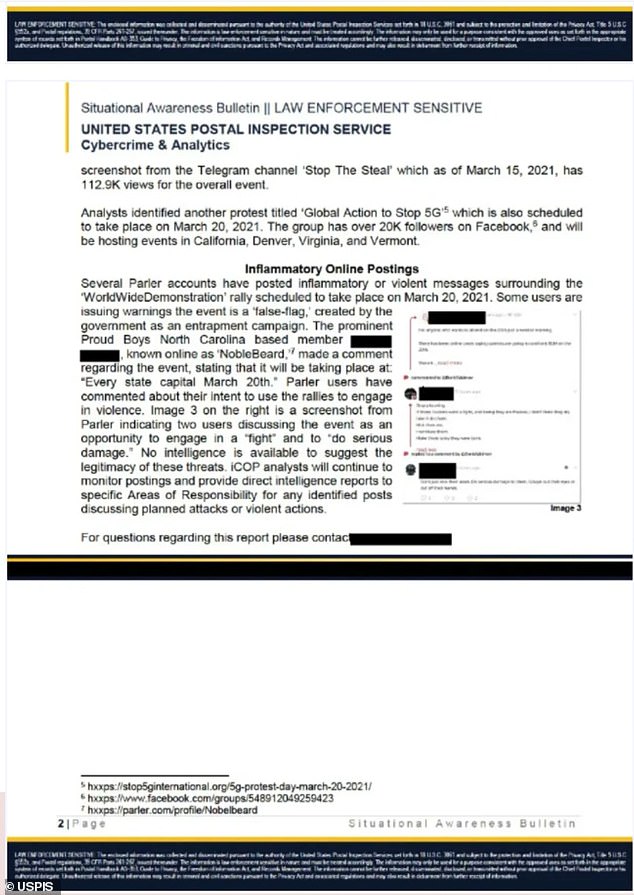 It includes screenshots of posts from Facebook, Parler, Telegram and other social media sites about protests

‘Locations and times have been identified for these protests, which are being distributed online across multiple social media platforms, to include right-wing leaning Parler and Telegram accounts,’ it continues, but later notes: ‘No intelligence is available to suggest the legitimacy of these threats.’

Barksdale told the Oversight Committee that while the operation would continue, they would put an end to the bulletin.

The bulletin, distributed through the Department of Homeland Security’s fusion centers, includes screenshots of posts from Facebook, Parler, Telegram and other social media sites about the protests.

It does not appear any of the posts from the bulletin, including one from an alleged Proud Boy, contain any threatening language.

Individuals, who were mentioned by name and other identifying information.

Former President Donald Trump and his allies continue to push claims of widespread voter fraud in the 2020 presidential election – specifically in relation to the mass amounts of mail-in ballots due to increased remote voting during the coronavirus pandemic.

Rep. Mace, who serves on the House Oversight and Reform Committee, revealed that Barksdale claims iCOP isn’t a real ‘program’ at USPS because it’s ‘incident-related’ not an ongoing matter, but the social media operation is being overseen by an ‘executive.’

Barksdale also said he doesn’t know how much money is being allocated for the spying initiative, Mace said, and would not say during the briefing which agencies are coordinating with USPS.

The USPS was hit hard by the coronavirus pandemic. In August 2020 it reported losing $2.2 billion in the three months that ended in June.

‘As such, the U.S. Postal Inspection Service has federal law enforcement officers, Postal Inspectors, who enforce approximately 200 federal laws to achieve the agency’s mission: protect the U.S. Postal Service and its employees, infrastructure, and customers; enforce the laws that defend the nation’s mail system from illegal or dangerous use; and ensure public trust in the mail.

They added: ‘The Internet Covert Operations Program is a function within the U.S. Postal Inspection Service, which assesses threats to Postal Service employees and its infrastructure by monitoring publicly available open source information,.

‘Additionally, the Inspection Service collaborates with federal, state, and local law enforcement agencies to proactively identify and assess potential threats to the Postal Service, its employees and customers, and its overall mail processing and transportation network.

‘In order to preserve operational effectiveness, the U.S. Postal Inspection Service does not discuss its protocols, investigative methods, or tools.’