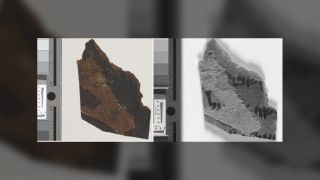 The Hebrew word “Shabbat” is visible in the upper right hand corner. A lamed (the letter “L” in Hebrew) is written on the left side of the fragment.(Image: © Copyright The University of Manchester)

Four Dead Sea Scroll fragments, previously thought to be blank, are anything but: Detailed imaging has revealed that these ancient pieces of parchment contain letters, sewn thread, ruled lines and even a discernible word, new research finds.

The finding almost went unnoticed, until Joan Taylor, a professor of Christian origins and Second Temple Judaism at King’s College London, took a magnifying glass to these fragments and noticed that there was a “lamed,” the Hebrew letter for “L,” written on one of them.

At the time, Taylor said she thought that she “might be imagining things. But then it seemed maybe other fragments could have very faded letters too,” she said in a statement.

Taylor’s hunch paid off. One of the four fragments had four lines of text, with a total of 15 to 16 completely or partially preserved letters. One word, “Shabbat,” the Hebrew word for “Sabbath,” is clearly visible, and this clue, as well as several other letters, suggest that this fragment might be from the biblical book of Ezekiel (46:1-3).

The Dead Sea Scrolls consist of more than 900 manuscripts written by an ancient Jewish sect known as the Essenes. Since the scrolls’ discovery in the Qumran caves of the West Bank in 1946, scholars have pored over the texts, which include versions of the Hebrew Bible, calendars, astronomical observations and community rules.

Although some parchments touted as Dead Sea Scrolls are forgeries, the fragments studied in this experiment are the real deal, according to a news statement from The University of Manchester in England. These fragments were discovered during the official excavations of the Qumran caves, and were never channeled through the antiquities market.

In the 1950s, the Jordanian government gifted some of the fragments to Ronald Reed, a leather and parchment expert at the University of Leeds in England, so he could examine their physical and chemical composition. At the time, it was thought that these fragments were blank and could be used for scientific tests. After Reed and his student, John Poole, studied the fragments, they stored them safely away.

This collection was then donated to The University of Manchester in 1997, but received little attention, until now, when Taylor spied the Hebrew letter. To see if any of the other fragments had text, she photographed all the pieces in the collection that were over 0.4 inches (1 centimeter) long — 51 in total — that appeared blank to the naked eye.

Taylor didn’t use regular photography. Instead, she relied on multispectral imaging, a technique that uses various wavelengths, such as infrared, on the electromagnetic spectrum to capture images of hard-to-see figures, such as the carbon-based ink on the scrolls. In the end, she and her colleagues found that some fragments had ruled lines or vestiges of letters, but only four fragments had Hebrew or Aramaic text.

One of those pieces was from the sewed edge of a parchment scroll, and had a few letters on it, according to the statement.

“With new techniques for revealing ancient texts now available, I felt we had to know if these letters could be exposed,” Taylor said. “There are only a few on each fragment, but they are like missing pieces of a jigsaw puzzle you find under a sofa.”

This isn’t the only time that supposedly blank pieces of the Dead Sea Scrolls have been found to contain text. In 2018, another group announced that infrared imaging had revealed Hebrew letters and words on several of the scroll fragments, Live Science previously reported.

The new project is part of the Network for the Study of Dispersed Qumran Cave Artefacts and Archival Sources (DQCAAS). The results will be published in a forthcoming report.