By CHRIS JEWERS FOR MAILONLINE

A holy Jewish Site in Hamadan Province in Iran has been set ablaze, according to the director of the Anti-Defamation League (ADL).

The tomb of Esther & Mordechai is believed by some to house the remains of biblical Queen Esther and her cousin Mordechai. It is reportedly the most important pilgrimage site for Jews in Iran.

‘We hope that the the authorities bring the perpetrators of this antisemitic act to justice & commit to protecting the holy sites of all religious minorities in Iran.’

Greenblatt did not cite the source of the report, but other organisations have since claimed to have confirmed the attack, which a twitter exchange suggests could have been premeditated.

The Simon Weisenthal Center, a human rights organization, said that Iranian activists had confirmed the attack to have occurred on May 14, the 72nd anniversary of when the state of Israel was founded.

It is unclear whether the attack was related to the anniversary. 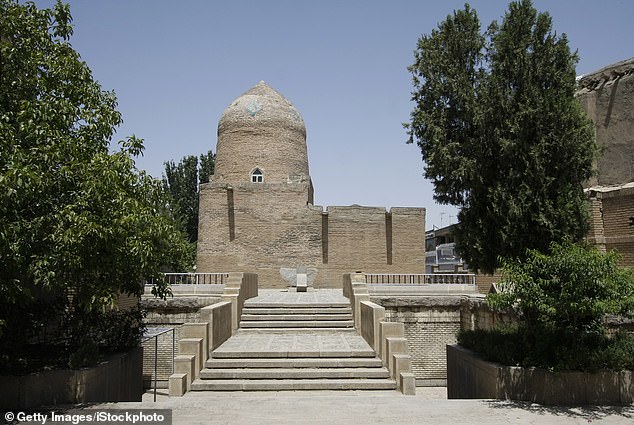 The Tomb of Esther and Mordechai is located in Hamadan, Iran is believed by some to house the remains of the biblical Queen Esther and her cousin Mordechai. Reports say that it was set on fire on May 14

Earlier on May 14, a twitter user by the name of Mohammad Mahdi Akhyar threatened to destroy the holy site, in response to a Tweet by Israel’s Foreign Affairs’ Farsi Twitter page.

Roughly translated, Akhyar threatened if the twitter page continued to post, ‘the fire brigade will be at the disposal of Hamedan, the tomb of your stories.’

The initial tweet from Israel’s Foreign Affairs’ Farsi twitter account, that Akhyar was responding to, said that ‘The regime of the Islamic Republic is deadly in the air, on land and at sea, even more so than Corona.’

A number of top-U.S. jewish groups joined the ADL in strongly denouncing the reported arson attack, including the Conference of Presidents of Major American Jewish Organizations and the Simon Wiesenthal Center.

‘We strongly condemn the attack on the Tomb of Esther & Mordechai in Hamedan Iran, which follows a threat last Feb. against the site,’ he wrote on Twitter.

‘Iran’s regime is the world’s chief state sponsor of Antisemitism. It must stop incitement and protect its Jewish community and other minorities.’ 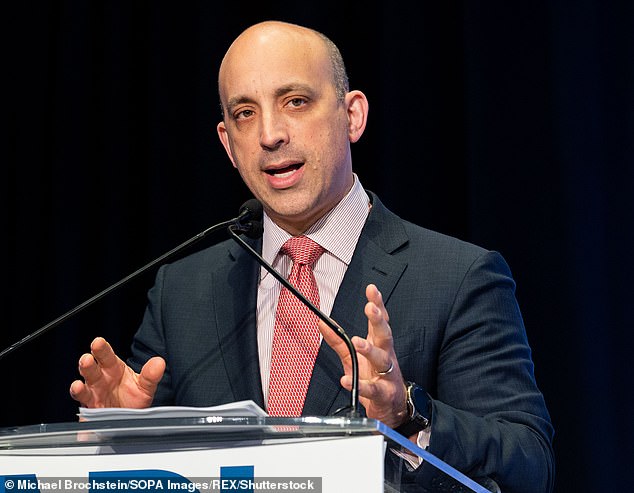 ADL director Jonathan Greenblatt tweeted on Friday tweeted the news of Friday, but did not cite where he had received the infomration

‘We hope that the the authorities bring the perpetrators of this antisemitic act to justice & commit to protecting the holy sites of all religious minorities in Iran,’ Greenblatt tweeted

‘This abhorrent and unconscionable act represents not only a blatantly antisemitic assault on Jews and Judaism, but an assault on all people of faith,’ the statement read.

‘It must be unequivocally condemned by the international community. The government of Iran must act to prevent further attacks and bring to justice those responsible. 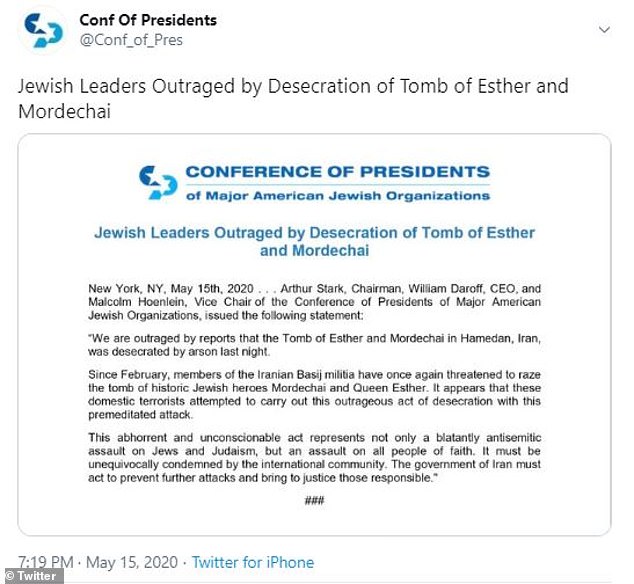 The Conference of Presidents of Major American Jewish Organizations released a joint statement condemning the attack, saying they were ‘outraged’ by the reports

Human right organization, The Simon Weisenthal Center, said Iranian activists claimed to confirm the arson attack, saying that while such sites were traditionally protected in Iran, that had since changed.

‘Historically, Muslims safeguarded Jewish holy sites from Persia to Morocco, including the Tomb of Esther and Mordechai,’ the organization said in a statement.

‘But all that has changed under the Ayatollahs and the terrorist movements they have spawned. In recent years there have been annual anti-Semitic protests at the Holy Site where Jews have come to pray peacefully for hundreds of years.’

Adding to speculation over the incident, American journalist Michael Lipin tweeted that eyewitnesses had seen fire trucks heading towards the tomb.

‘An eyewitness in Iran’s Hamadan city told VOA News he saw several fire trucks going to the Tomb of Esther and Mordechai after an apparent arson attack on Jewish holy site Thursday night, but authorities didn’t allow people to get close,’ Lipin wrote on Twitter.

The Jerusalem Post has reported that the The Islamic Republic News Agency (IRNA) said on Sunday that a suspect has earlier sought to enter the tomb.

A US government funded news outlet, Radio Farda that reports on Iran wrote that the IRNA ‘confirmed that there had been an attempt to break into the tomb of Esther and Mordechai, a holy Jewish site in Hamedan, but removed the report from its website two hours after its publication.’

According to Radio Farda, the IRNA said that the suspect had attempted to enter the site through a building next door, but was not successful, and added that the site did not suffer any damages. Police are said to be searching for the suspect. 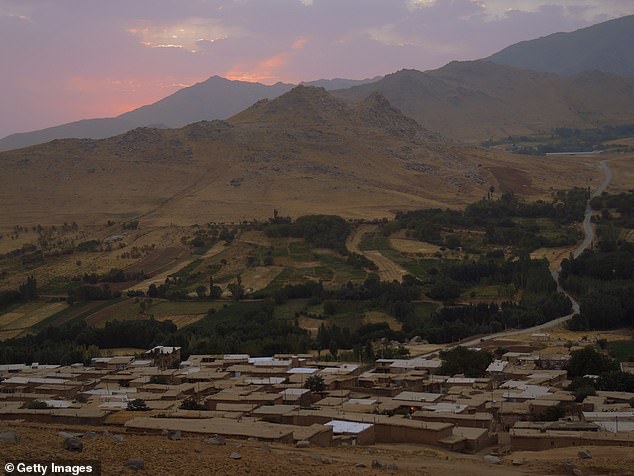 The Alliance for Rights of All Minorities (ARAM) in Iran tweeted on Sunday, also saying they had heard reports of an attempted break in to the Tomb of Esther & Mordechai.

‘According to covering reports, members of the Iranian Basij attempted to raid the historic [tomb of Esther and Mordechai] site yesterday in an act of revenge against the [Israeli-Palestinian] peace plan by US President Donald Trump,’ the group wrote.

It also claimed that Iranian authorities had threatened to destroy the holy site, and ‘convert it into a consular office for Palestine.’

The ARAM wrote that Esther and Mordechai ‘were biblical Jewish heroes who saved their people from a massacre in a story known as Purim. Their burial site has been a significant Jewish landmark for Jews and history buffs around the world.’